To receive Thunder Journals in your morning inbox (hours or days before they publish to DailyThunder.com), join our supporters on Patreon.

The Oklahoma City Thunder’s rebuilding project had what will hopefully become a landmark night last Thursday. OKC drafted Chet Holmgren, Ousmane Dieng, Jalen Williams and Jaylin Williams. Most draft analysts lauded the Thunder as one of the big winners of the 2022 NBA Draft, and DT’s Aidan Elrod graded it a solid collection of rookies to throw into the developmental timeline.

Thunder GM Sam Presti held a press conference late on draft night before welcoming the newly drafted additions to OKC in a presser on Saturday afternoon. Here’s a selection of statements from the players’ introduction and my thoughts on which quotes are particularly meaningful.

Presti on OKC’s rookie class: “The state motto here is hard work conquers all. I think these guys personify that.”

There’s only one thing we Oklahomans like more than players who work hard: hearing that we Oklahomans work hard. Double bonus score. To Presti’s point, though, if scouting reports are to be believed, high work ethic was a common trait in all four of these players’ strengths column.

Jalen Williams laughed and cleared up the confusion between him and the other Jaylin Williams drafted by OKC: “I go by J Dub. That’s J Will.”

The quote that cleared up fan confusion while simultaneously launching a thousand Spider-Man memes.

Chet Holmgren on what he liked about OKC: “Now that I’m here I can officially say this is where I wanted to be. It’s a great city, a great organization and great fans.”

It’s pretty telling that Holmgren preferred to end up in OKC over both being the #1 pick and reuniting with his high school teammate and close friend Jalen Suggs in Orlando. The rumors of Chet tanking his Magic workout may have indeed been true. Talk about meant to be… OKC tanked for Chet and Chet tanked for OKC.

Amid Chet Holmgren’s undeniable confidence and swagger, Jalen Williams’ palpable coach-like composure and Jaylin Williams’ arena-sized personality and smile, this earnest response from the more soft-spoken Dieng stood out as an endearingly joyous moment of appreciation and awe.

Presti on trading three picks to draft Ousmane Dieng and Jalen Williams: “We wanted both players.”

Jaylin Williams: “I’m just willing to do whatever the team needs to do. I can be an energy guy, whatever it takes.”

If you have any doubt that this is just typical player-speak, allow me to direct you to this seven and a half minute compilation of JWill taking charges:

Jalen Williams on his jersey number: “I picked 8. Definitely a tribute to Kobe.” He says he tries to play with Mamba Mentality.

JDub not only will be representing Kobe on his jersey, but on his body as well. Williams rocks a Kobe tattoo on his right leg. In an interview previous to the draft, Jalen said one of the players he most likes to watch is SGA. The kid knows ball.

Presti on Dort’s contract: “We have an option on that agreement. It’s our plan to exercise that. Everybody knows how we feel about Lu and what he means to the team. That said, he’ll be a free agent next season and we’ll be able to have conversations with him about that then.”

The juiciest nugget of information divulged in either press conference. Now we all wait to find out if Lu will eventually be extended, traded or head to unrestricted free agency.

Chet Holmgren: “I’m really excited to be here. Thunder Up!”

Now close your eyes and imagine Paolo Banchero saying the same thing. You can’t do it, can you? Neither could Sam.

Presti on recently-acquired JaMychal Green. “I think we’ll probably find a situation for him that’s not with us. But not because we don’t value him but because of where he is at right now.”

Good for JaMychal, good for OKC’s young bigs and good for any beat writer trying to piece together the Thunder’s starting and bench power forwards. The position is still a complete mystery consisting of Jeremiah Robinson-Earl, Darius Bazley, Ousmane Dieng, Derrick Favors, Isaiah Roby, Jaylin Williams and Aleksej Pokusevski. One down, seven to guess.

Chet Holmgren laughed when asked about his official height: “It seems like I’m getting taller? It seems like every time I think, ‘ahh I’m done growing,’ I measure and I’m somehow taller. So who knows.”

When I asked him this question, I was holding my phone camera level to my face and when I watched it later, the video cut off the top of his head. In other words, Chet’s official height is about two feet taller than me.

Jalen Williams on his first impressions of OKC: “The people. It’s been like a crazy warm embrace. The people are really cool and genuine.”

Chet Holmgren on his fit with SGA and Giddey: “I feel like I fit in well with them. They’re great players. Shai is a really good scorer, Josh is a great passer. Just go out there and be a great floor spacer.”

This draft has the potential to be franchise-altering for the Thunder. Dieng has one of the highest upsides in the class. JDub projects as a potentially potent passer, scorer and shooter. JWill has that Nick Collison connective role player, high IQ quality about him. But ultimately, OKC landing Chet to go alongside SGA and Giddey as a cornerstone Big 3 is what could change Oklahoma City’s trajectory going forward. And like Chet says, the fit feels pretty perfect. Bring on Summer League already so we can take a sneak peak into the future. 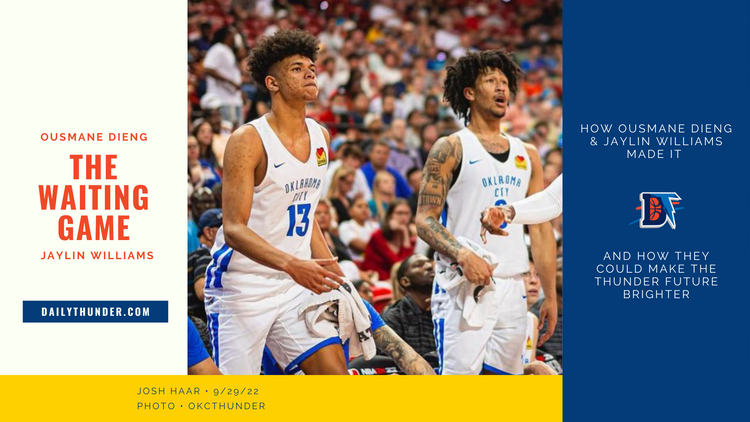