there’s this new Thunder fan website called Thunder Madness (http://thundermadness.com/). It’s been advertised about as much as Righteous Kill and is equally as crappy.

Now I don’t know this for a fact, but by all appearances, Thunder Madness looks to be the brainchild of those at The Oklahoman. It’s had awkward advertisements in the paper where NO advertisement has ever been (like within a story). There’s all the Wimgo ads on the website. Staff writers for The Oklahoman are some of the main posters on the message boards. They have the newsok.com Thunder videos up within seconds of them actually going on NewsOk. But then there’s the big-time kicker – the thing that shores it all up.

Down at the bottom the site is registered to OPUBCO Communications Group – the folks that publish The Oklahoman. And if you click report issue (like that this site is a total piece of crap and an embarrassment to the state) the email address it directs you to is 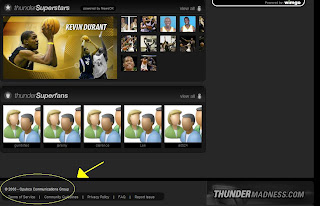 Now granted, I’ve never been part of a big league city so this may be common place, but regardless, it needs to stop. Newspapers should not ever be involved in a fansite. Ever.

The correct process for this fansite thing, is that

are the ones that buy the webspace, pay the dues, buy the jerseys, buy the tickets and run the website. Hence it being call “fan” site. Not some guy that’s getting a paycheck from the Oklahoman. I’m no expert but in my four years at one of the best journalism colleges in the country, I learned that journalists – sports or not – are supposed to try to their darndest to be unbiased and fair. It was tough for me at OU to cover the football team because I literally breathe everything Sooner football. My eyes water and I swallow hard ever time I watch this video. So being fair for me was like a dad coaching his son. You want him to do so well and play all the time but you try as best you can to be fair.

So for the Oklahoman to pull this crap – that’s disturbing. How can we expect them to do what journalists are called to do – report – if they are

as big of fans as we are? How will Mike Baldwin react if Kevin Durant gets busted with drugs? Will he act like some PR dude for the Thunder and spin is positively? I can’t say he wouldn’t because all signs point to him being too much of a fan to be objective. What if the Thunder goes 18-64 this season and 16-66 the next? Will The Oklahoman have the basketballs to call for P.J. Carlesimo’s neck? Will thundermadness.com delete any posts by fans calling for The Beard to be fired? There’s supposed to be separation between the writers and the fans – that’s why they work for The Oklahoman and we don’t.

The Oklahoman has seen a state go crazy and is looking to swoop in and make a dollar. The see the opportunity to cater to fans by building a fansite, not by doing their job. If you want fan involvement, let the fans handle it. There’s already a number of blogs running and a great Thunder forum – http://www.oklahomacitythunderforum.com/. If you want to post and talk about the team (which I hope everyone does) then go there. Not some place run by the major newspaper in Oklahoma.

Boycott thundermadness.com. Let Mike Sherman (the Oklahoman’s sports editor, not Texas A&M’s terrible coach) know what a joke this is. It’s wrong and it needs to be stopped.