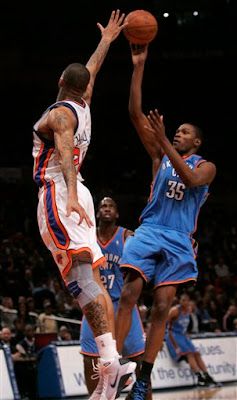 Another deep hole, another valiant comeback try. And another one coming up short as Oklahoma City fell to the Knicks (6-3) tonight 116-106. The Thunder (1-8) closed the gap to seven after at one point being down 30. Seeing as this is becoming a recurring theme, I tend to think teams are just pulling back and losing focus when building these 20-30 point leads over OKC. But also a theme is the lack of quit. One of these times, a team is going to mess around and the Thunder are going to get them. Some teams will quit and start thinking about breakfast the next morning when down 30, but not the Thunder.Looking back, there are so many missed opportunities that just make you want to scream in a pillow. After cutting the lead to just seven, Jeff Green had a wide open look at a three to cut it to four. He hit front iron. Down eight, OKC had a fast break that finished with three missed attempts. Down 10 with about two minutes left, OKC forced a turnover that looked to lead to a fast break but Green promptly gave it right back. So many chances to really tighten the thing up. Russell Westbrook played his best game as a pro (19 points, 10 boards, six assists). That’s a really, really good line. If/when he gets a consistent jumper going, he’s going to be lethal. Like impossible for other guards to defend. He is so quick and controls the dribble so well. He gets to the rim at will and can finish as good as anyone. I think my favorite lineup is the one that finished the game. It was Westbrook, Durant, Mason, Green and Swift. I think Green creates a lot of good matchup issues at the four and Mason is a good defender and an excellent leader on the floor. He plays hard. Swift has the ability to control the paint – he had 13 rebounds which ties a career high – and I love having a true post man on the blocks. Westbrook’s freakish athleticism and Durant’s ability to score from anywhere give that lineup diversity, defense and scoring ability. One other positive: I really like the black shoes with the road blues. I’ve always been a black shoe guy, and I just thought they really made the road duds look a little better. To wrap up, as long as the Thunder digs themselves into big holes, they’re going to keep dropping games. Sure we can all be encouraged that they don’t quit – which is great, it really is – but the wins won’t start coming until that stops. Like I said, they may catch a few teams napping long enough to finish the comeback but getting consistent is such a key. I know that’s obvious, but as I’ve been saying a lot, as long as we’re better at the end than we are right now, I’m happy. And the starting point is four quarter consistency. The Thunder move a little south on their East Coast trip to take on the 4-5 Philadelphia 76ers tomorrow night in Philly. Tip is at 6:00 PM CST.