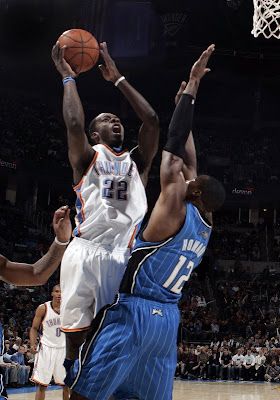 As Oklahoma City fought its way back to respectability in the third quarter against the Orlando Magic, I wondered, “Is this the Magic just going through the motions or are the Thunder playing their hearts out again like in Utah?”

I think the answer is a little of both.

Orlando had no need to keep up the intensity with a 30 point cushion, but some teams quit when down like that. The Thunder didn’t. They used the little light the Magic gave them and capitalized, outscoring Orlando 29-16 in the third cutting the Magic lead to 16. Orlando put up 71 points in the first half but then just 38 in the second. Of course, it wasn’t enough as the Magic (5-3) thumped the Thunder (1-7) 109-92 Wednesday night.

But about four minutes into the game it was clear: Oklahoma City was not going to win the game. Some may have figured that out before the game even started with Kevin Durant sitting this one out with a sore ankle.

This was just an absolute mismatch. An absolute recipe for disaster. Dwight Howard doesn’t let anyone in his lane and if they happen sneak in, he promptly throws their shot into the second row. The Thunder stinks at shooting jumpers. I think you can put two and two together there. And on top of it Orlando’s big man was unstoppable offensively too. Just check out Howard’s stat line – 30 points, 19 rebounds and 10 blocks. Yeah, pretty good game.

Nothing to really second guess or breakdown tonight. OKC was just overmatched in every way. Of all the games to miss, this may have been the worst one for Durant, because he’s really the one guy that can hit a consistent jumper. 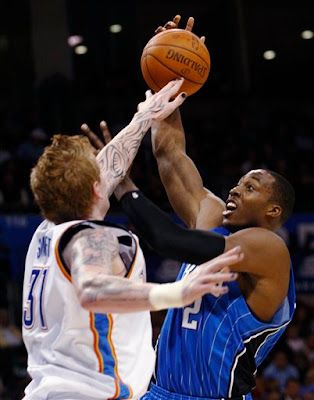 A new-look Robert Swift actually played Howard relatively well. Swift blocked him twice and “sort” of slowed him down. Swift entered earlier (about eight minutes left in the first) and played his most minutes (18), pulling down seven boards and netting three. In a way, Big Robert’s haircut might have been the highlight of the night.

– Somebody on the canal mistook him for Ronald McDonald
– He kept getting it caught in the rim.
– He thought a haircut might help his image.
– Too many people were getting him confused with a mascot.
– He felt it was affecting his upside.
– He actually saw himself in a mirror.

Jeff Green did his darndest to pick up the slack for Durant as Green had 25 and 10. And he kept up the good three point shooting hitting three of six. Maybe he’s coming around. I hate to be the “next year” guy, but if he’s starting to get it and Durant is moving forward, then things may really start to look up soon.

Russell Westbrook went 3-19 from the field but actually played better than those numbers indicate. I counted at least three shots that were tossed by Howard. So I guess, “potentially” those could have went in. But he made some nice passes in the lane once he figured out he couldn’t score over Superman. And how freakishly athletic is Westbrook? He really can go up with anyone. He has the ability. He just needs to put it together and he could be special.

And is it just me, or does Desmond Mason fade on every single jumpshot? I’m no jumpshot technique expert, but

that’s why he struggles so much with the jay. Maybe.

When teams are as young and inexperienced as the Thunder, games like this can potentially happen every night. Things start to snowball, you get overwhelmed by the other teams sheer talent and you’re in a 20 point hole before you know you tipped off. But the bright side is with a team this young and inexperienced, improvement happens at a rapid rate so by the end of the year these guys may be totally different than this. They’ll limit the hurried bad shots. Limit the dumb transition turnovers. Limit the feeble shots into the chest of the best shot blocker in the world.

Tomorrow off and then to the east coast for a couple games starting with the Running D’Antoni’s as OKC takes on the Knicks (5-3) Friday night in Madison Square Garden.