Through six games, third-year guard Terrance Ferguson is off to one of the worst offensive starts in the entire NBA. Ferguson, an above-average 3-point shooter a season ago, has barely shown the ability to get in position to take shots on this team — let alone make them.

Last season, he benefited greatly from a two-man game with Jerami Grant and as a corner shooter for Russell Westbrook to kick out to on drives. With Grant and Westbrook elsewhere, Ferguson has taken just 16 shots in 134 minutes. He’s made six of them.

If that sounds bad, it’s because it is. If you assume field goal attempts per minute is a decent barometer for confidence and/or aggression, Ferguson is the least confident/aggressive player in the NBA so far this season. Through Sunday’s games, Ferguson was averaging a league-worst (amongst players with at least 125 minutes played) .12 field goal attempts per minute.

That’s a made-up metric, but it makes sense. The better players in the NBA should be taking the majority of the shots. The leaders through Sunday in that category? Kawhi Leonard, James Harden, Kyrie Irving and Bradley Beal. No one expects Ferguson to be in that company. But why is he shooting less than Trevor Ariza, Mario Hezonja, Royce O’Neal and Patrick Patterson?

Can he break back through?

How can Ferguson re-establish himself as a viable part of Oklahoma City’s offense?

It’s not going to be easy. Westbrook opened a lot of avenues for Ferguson in his first two seasons, and while Shai Gilgeous-Alexander and Chris Paul are great players, neither are as adept at creating for others at this stage.

That means Ferguson will have to do one of two things:

At Oklahoma City’s media day late last month, Terrance Ferguson had an interesting comment when asked where he’s hoping to make strides in Year 3 of his NBA career.

It makes sense for a guard to want to dribble more, and the organization has always encouraged him to try to improve that area of his game.

Only one time did Ferguson hit the roll man for an assist. Here it is:

That’s it. That’s the only one.

So far this season, Ferguson has recorded multiple assists in a game just once. He has six total. Here’s a summation:

Sensing a theme? Only one time so far has Ferguson picked up an off-the-dribble assist, despite playing 134 minutes. It seems unlikely he’s going to develop that skill at this stage, given he didn’t showcase that ability as a professional in Australia, either.

But there’s still option two: the ability to get open shots via movement or running off screens.

That’s a skill that’s more rare than you might think. Guys like Klay Thompson, J.J. Reddick, and  Landry Shamet are the best at it right now, and it can really help unlock an offense that’s struggling to open up more lanes for playmakers.

Of Ferguson’s 16 shots so far, three of them have resulted from him running off a screen. Here they are:

He missed two of them, but those are good shots! Those are the shots Billy Donovan should be imploring Ferguson to take. The biggest problem is, there’s only been three of them in six games. By my count, five of his 16 shots have come in transition, which means he’s taking less than two shots per game within the structure of the halfcourt offense.

Last season, Ferguson proved to be a streaky shooter who thrived when he played with confidence. From December through February last season, he shot better than 35 percent from 3 in each month. He made 44 percent of his threes in May. But in every other month? 7.7 percent (October), 33.3 percent (November) and 29.9 percent (April).

Predictably, his volume was at an all-time high last January when he made 47.9 percent of his 3-point attempts (nearly 5.5 shots per game). It’s not too late for him to get back to that volume, it’s just going to have to come in different ways.

The good news: With Oklahoma City’s situation being what it is, the Thunder can afford to bring Ferguson along slowly into this Westbrook-less offense. The wins and losses don’t matter — at least not as much as they did at any point in the last decade.

That means it’s worth it for the Thunder to nurture Ferguson into being a productive player in this offense again. The alternative would be to trade him to a contender, likely as a throw-in as part of a Paul or Gallinari trade closer to the deadline. If that idea becomes reality without Ferguson finding his groove again, Sam Presti probably will have had to sell low on his 2017 first-round pick.

Ferguson won’t turn 22 until May, and increased his 3-point percentage by 33 points last season while doubling his volume. If he’s able to approach Green’s peak in the next few years, Ferguson will be much more valuable to the Thunder on their next contender. 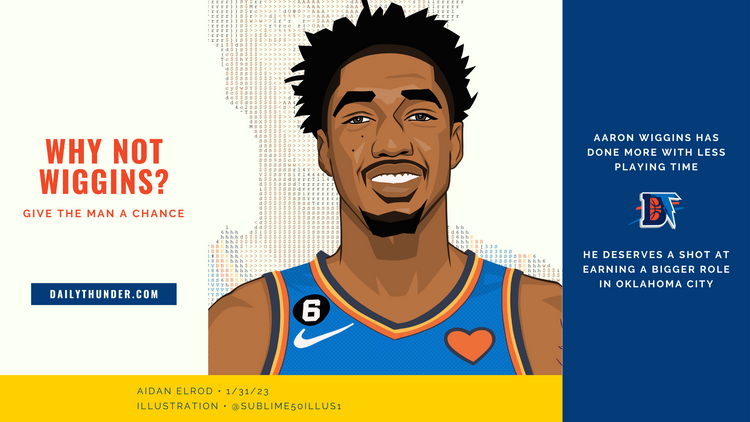