Before the season started, I wrote a piece on what to expect from Shai Gilgeous-Alexander, and projected what kind of player he might become. Let’s just say he’s exceeded my (and everyone else’s) expectations so far.

Coming into the season, I looked at Shai’s body of work in the NBA and college level and thought that he would be a versatile combo-guard who could do almost anything you asked of him on a basketball floor. But he never had one standout skill. Currently averaging a shade under 20 PPG on 55% TS, the reality is that Shai is one of the best up-and-coming young scorers and offensive players in the league.

One thing I noted in October was that all the best guards in the league have a dynamic pull-up game, especially from distance. Players such as De’Aaron Fox and, to a lesser extent, Dennis Smith Jr. saw a jump in frequency and FG% when taking pull-up threes their sophomore years. Shai has quadrupled his attempts in that department this season.

Although the percentages have remained about the same, the uptick in volume is encouraging when it comes to his development as a perimeter scorer, especially since he looked hesitant to attempt these kinds of three-point shots last season.

Another thing that Shai has developed and implemented into his game more is the stepback three. After only attempting two all of last season, he’s up to 32 this year (as of writing this) and is hitting a respectable 34.4% on these shots.

Despite a six percent increase in usage, Shai has topped last year’s marks in TS%, 3PAr, and FTr. His 1.83 O-PIPM is seventh among players who are 23 years or younger. Combining an above-average ability in getting to the line, a 7’0 wingspan, crafty and creative finishes around the basket, and a growing arsenal of perimeter moves, Shai might reach levels, at least offensively, that nobody could have seen coming.

Shai’s defense has regressed slightly since last season, but he’s not a defensive liability and this regression could coincide with his uptick in usage on the offensive end. If you watched all three Oklahoma City games versus Houston this year, you saw Russell Westbrook continue to bully Shai down low, taking advantage of the strength mismatch between the two.

Despite his tremendous length and wingspan for a guard, Shai is still very skinny at only 180 pounds, according to NBA.com. As he continues to participate in NBA strength and conditioning programs, I would hope that he gains around 10 pounds in muscle to try to match Lonzo Ball, who comes in at 190 pounds.

According to data from Krishna Narsu, Shai has had a massive decrease in the share of time he’s guarded opposing point guards compared to last season. That makes sense given the fact that Shai has played a majority of his minutes at shooting guard this season, but he’s defending bigger and stronger players more often across the board.

Here are his rankings among shooting guards who have 500+ possessions on the year:

The young guard is even starting to block more shots, swatting 18 this past month compared to only 14 in total the previous three months.

Where does he go from here?

Even though he’s been in a bit of a shooting slump (perhaps affected by leading the NBA in minutes played) over the past four games,  Shai has started to show out in terms of his passing vision and court awareness, racking up a solid four assists per game on only 23% usage in the month of January.

Shai’s combination of acrobatic finishes, absurd length, and increased confidence in his pull-up game, all bode well for the future of OKC’s rising star. With more and more experience on the court and under the wing of future Hall of Fame point guard Chris Paul, Shai will hopefully iron out some of the mental lapses in his game like roaming and floating off-ball on defense, and maybe even pick up some of Paul’s tricks (like his signature rip move) to draw more fouls. Whatever the future holds, OKC looks to have one of the better young NBA players on their team for the foreseeable future.

Shai is a key piece of the NBA’s best lineup and has “second option on a championship team” written all over him.

Jacob, Nick, Kamiar and JD jump on the show to do some mid-summer over/unders, including win totals, all-stars, all-rookie
Jul 25, 2022
Jul
25 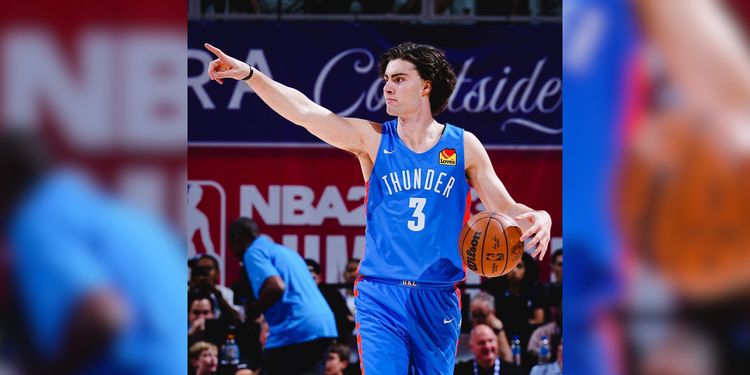