Now that we’ve explored the best-case scenario for the Thunder; it’s time to divulge into a deeper, darker timeline– the series of events Thunder faithful can only conjure up in their worst nightmares.

Game one against the Jazz becomes a tightly contested affair. Donovan Mitchell and Rudy Gobert seemed to have worked through whatever disagreement they previously had, and are clicking on all cylinders. Gobert manages to take Steven Adams out of the game early, preventing him from getting in a rhythm down the stretch. Shai Gilgeous-Alexander is the only source of consistent offense all night, but even he can’t do it alone. As the game heads to overtime, all Thunder fans across the nation hold their breath– we have been here too many times before. In the overtime quarter, the Jazz blits the Thunder and jump out to an insurmountable lead. The Thunder drop their opener in Orlando.

Game two versus Denver is a horror of the utmost distressing nature. Skinny Nikola Jokic is better than chubby Jokic. And Steven Adams has no answer. Jamal Murry also puts on the performance of his career, dishing and swishing his way to a 30 point double-double. The Thunder are never close. And the team drops another game in Orlando.

Game three: Thunder vs. Lakers. If two beatings weren’t enough, here come the Lakers for a third. And bad news, Chris Paul is out tonight with hamstring soreness. With Paul out, the Thunder lose stability and the team’s offense struggles out of the gate. They pull the lead to within five with three minutes left. Gilgeous-Alexander has put on a show with 33 points, up until this key juncture in the fourth.

The Thunder close the gap to within two, with seven seconds left. And Dennis Schröder makes the play of his life, stealing the ball from Anthony Davis. After struggling for the first two games, here the Thunder stand on the precipice of beating ESPN’s favorite team. The ball is in the hands of Schröder, who zips a pass to SGA with three seconds remaining. SGA sees Adams streaking down the lane, and dumps a drop-off pass to him. Adams goes up, but does not see Davis coming from behind for a chase-down block. In true LeBron fashion, Davis blocks Adams and the Thunder lose a heartbreaker to the West’s number one seed. Three straight losses in Orlando.

If you aren’t panicked yet, I am not sure what is wrong with you.

Game four. Memphis. A Thunder team on pace to win 50 games has now dropped three straight in its NBA comeback. Nonetheless, the Grizzlies represent a very winnable game in comparison to the previous three. With Paul back in the lineup, things go as expected. The Thunder cruised to a 15 point lead headed into the fourth. The rest of the game looks like a formality, but as a Thunder fan, you know it’s not. The Grizzlies go on an absolute tear and shrink the lead to just three with 30 seconds left. In the Grizzlies’ last possession of the game, Ja Morant slings a pass across the court to Brandon Clarke in the corner. He’s wide open, and does not miss. We are headed to overtime.

In overtime, Ja rules. The young standout puts the Thunder guards in a torture chamber, getting downhill and pulling off moves that we have no name for…yet. But still, the Thunder hang around. With 23 seconds left in the frame, OKC trails by one. With possesion and the clutchest player in the NBA (CP3), they hold for the last shot. As the seconds tick down, Paul makes his move. First a between-the legs dribble. Then a screen from Adams that Paul utilizes to get open in his sweet spot–the left elbow. He pulls up as the buzzer sounds, and many Thunder fans are expecting nothing other than a make. The ball hits the back iron and bounces off. The Thunder lose, again.

The second half: Seeding doom

Games five and six: Washington and Phoenix. For brevity’s sake, we’ll take these together. Both these teams are bad enough that even on our worst event timeline, the Thunder will probably win. So, in back to back blowouts, the Thunder earn their first two wins in Orlando. And they now sit 2-4 throughout the entire venture.

Game seven. Vs. Miami. With momentum finally on the upswing, the Thunder head to their seventh game in the Orlando bubble with high hopes. Those hopes are dashed, as Bam Adebayo, Jimmy Butler, and company torch the Thunder for 48 minutes. The team looks outmatched both mentally and physically. I guess Butler’s 3 A.M workouts worked. Again, OKC finds itself the sole proprietors of the loss column. And Paul’s hamstring is sore…again.

Game eight: Finale with the Clippers. The last game of the season is a playoff tune-up. However, the Thunder need a win in order to stave off the Dallas Mavericks from the six seed in the West. Two caveats: Paul isn’t playing and Adams tweaked an ankle at practice. The game is another debacle, and the Thunder fall behind early, as two of their key pieces are injured. Adams leaves the game early in the second due to severe ankle soreness. And with no Adams to anchor the middle, Montrezl Harrell has a runway in the middle of the lane for short roll dunks and drop-offs. Another L.

The playoffs bring this most nightmarish of a scenario to an end, with the familiar feeling of playoff disappointment that isn’t new to the Thunder. After losing to them in the last game of the season, Oklahoma City now plays the Clippers in the first round. One more win and they would’ve drawn a more favorable Nuggets matchup.

The series goes as expected. The reeling, injured, and torn Thunder side are overmatched for a conference finals bound Clippers team. No game is close, and the Thunder limp into the makeshift offseason with far more questions than answers. The largest one looming: How did this marvelous Thunder team falter with a shot at shocking the basketball world? 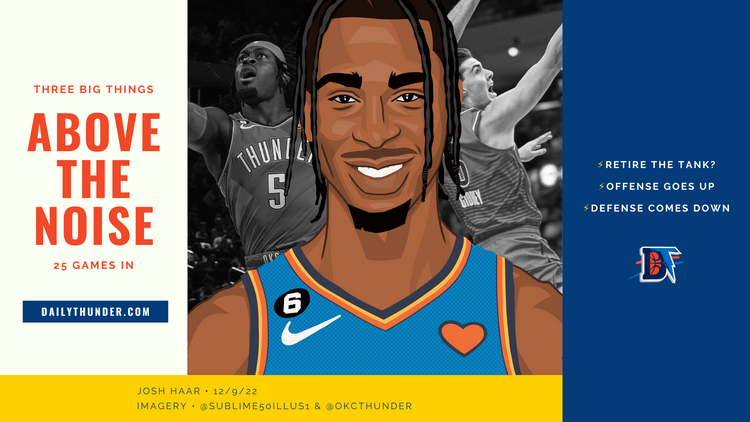