The Oklahoma City Thunder’s performance in the 2022 NBA Draft has widely been deemed a success, at least as far as pre-season expectations are concerned. A big reason for this is their selection of Chet Holmgren with the second overall pick, as the 7’1 center should theoretically fill a glaring front-court need and help fix spacing issues.

Outside of Chet, the Thunder also acquired three more rookies in this year’s draft: Ousmene Dieng, Jalen Williams and Jaylin Williams. All three played in Summer League, and they all displayed positive flashes of potential as quality NBA players. However, the Oklahoma City draftee who made the strongest impression was 12th overall pick Jalen Williams, as his accurate shooting and effective off-ball movement turned heads during the month of July.

So who is Jalen Williams? What helped him stand out in his NBA journey, and how did he land on OKC’s radar? Let’s take a closer look:

Jalen Williams attended Perry High School in Gilbert, Arizona. During his time there, he played a pivotal role in helping the Pumas become a basketball powerhouse. Jalen’s rise to stardom - along with the hiring of a legendary Arizona high school coach in Sam Duane, Jr. - sparked a senior season playoff run that led to a clinched spot in the 6A division Final Four. As a result of his on-court effort and leadership, he helped pioneer this basketball program to big-time success in the years after he left.

However, despite averaging over 25 ppg in 2019 and ranking ninth among recruits in Arizona, Jalen Williams was overlooked by larger universities during the recruitment process.

The reason: his body build.

Williams grew eight inches between his sophomore and senior year, and as a result, his frame seemingly did not keep up with his height. During his junior year - typically a big year for recruiting - Jalen clocked in at 6’3, 178 lbs. That is a far cry from the 6’6, 209 lbs frame we see today.

His former coach recently made a comment on this as well. From Richard Obert of the Arizona Republic:

“A lot of college teams passed on him. I would say, 'You're missing the boat, because when he fills into his body, he's going to be special.' ... I could see that in Jalen.”
- Sam Duane, Jr.

Jalen’s collegiate career got off to a slow start, at least offensively. He averaged 7.7 ppg and 1.9 ast on 43%/35%/76% shooting splits his first year. (College statistics courtesy of SportsReference.com)

However, he shined on the defensive end, recording the third-most steals by a freshman in school history with 44. Williams' defense earned him a starting spot for the final 23 games of Santa Clara’s 33 game season.

Following his freshman year, Williams made a point to put in the work to improve. Despite the COVID pandemic bringing the world to a halt in 2020, he ignored all potential excuses to stagnate and returned for his sophomore season as a stronger, better player. This work-ethic and ability to overcome obstacles started to catch the attention of his coaches. Jason Ludwig, assistant coach at Santa Clara, had a particularly strong feeling about J-Dub’s potential.

From Matt Norlander at CBSSports.com:

"I remember calling a coaching friend of mine and saying, 'I think we might have a potential pro.' ... I know how hard it is. I'm very hesitant to use that word: pro. But you saw it in practice.”
- Jason Ludwig

Unfortunately, his sophomore year didn’t quite show the progress he made in the stat sheet. While Williams' volume in point, assist and rebound numbers all increased, his percentages took dives across the board.

His junior season, however, proved to be a different story. Jalen burst onto the scene and onto NBA radars during his third and final year at Santa Clara. In a season in which his team finished 21-12 - good for third in the West Coast Conference - Williams led the charge. Not only did he average 18 ppg, 4.2 ast, 4.4 rbs and 1.2 stl, he pulled it off on incredible shooting splits: 51%/40%/80%.

Efficient shooting. Improved passing. A well-developed offensive and defensive game. J-Dub had officially shown his worth as an NBA-ready prospect. While his strong play put him on the map, there was one more event that ultimately catapulted him to a lottery selection…

Commonly mocked as a second rounder in the months leading up to it, Williams was a huge beneficiary from the 2022 NBA Draft Combine.

First off, he performed very well in the 5-on-5 action:

And his measurements were eye-popping to say the least. As previously mentioned, he weighed in at around 6’6, 209 lbs, but he also posted a 7’2.25 wingspan. That is insanely long. In fact, Williams is one of the longest players relative to height that the league has seen in a while.

It’s safe to say he grew into his frame, proving his former coaches right. The NBA noticed and the combine skyrocketed his draft value.

So why did OKC take Jalen Williams with the 12th overall pick?

Precision shooting to help with the Thunder’s lack thereof. Quality defensive capability with his combination of absurd length and athleticism. Coachability with his willingness to put in the work and fill a role.

OKC landed a potential draft steal in J-Dub, and Williams landed in the perfect environment to start his career. He's joining a young team hyper-focused on player development. If Jalen’s basketball journey so far has shown anything, it’s that he’s ready to embrace this next challenge and continue to grow as a player.

For the Thunder, Williams' knack for light-speed progress could help accelerate their own path to becoming a long-term contender once more. 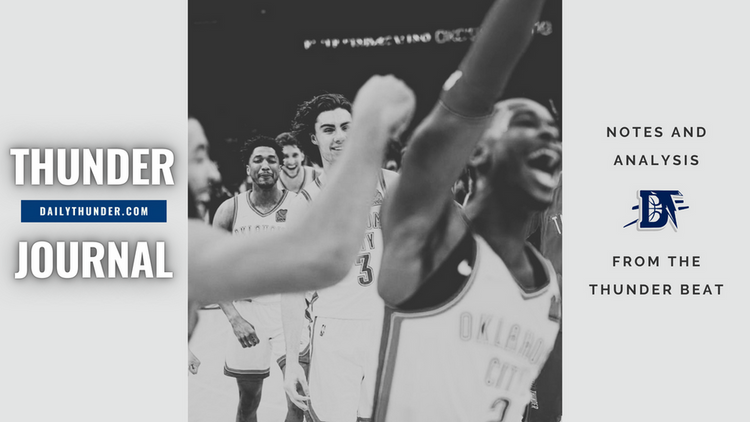 Thunder Journal: The JDub Break Out 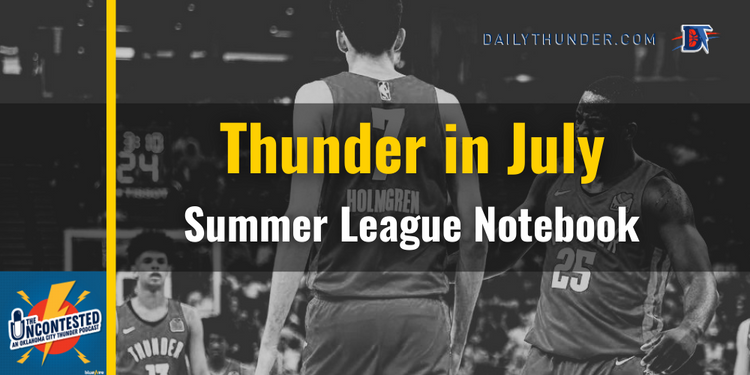 While in Las Vegas, Nevada for the NBA’s Summer League, The Uncontested Podcast crew is keeping a running notebook
Jul 10, 2022
4 min read
Jul
08

While in Las Vegas, Nevada for the NBA’s Summer League, The Uncontested Podcast crew is keeping a running notebook
Jul 8, 2022
3 min read